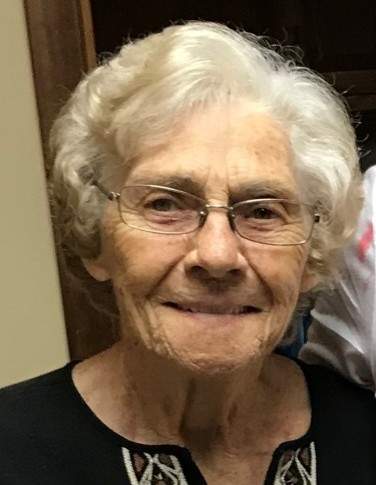 Daphne Dennis Farrell, age 83, of Athens passed away Monday, August 26, 2019 at her residence. A native of Spring City and a resident of McMinn County most of her life, she was the daughter of the late Gussie Elder and Silvia Hall Dennis. She and her late husband Jim Farrell owned and operated Farrell's Carpet Store in Athens, and she enjoyed traveling. quilting and bowling. She was a member of Clearwater Baptist Church and was preceded in death by her husband Kenneth "Jim" Farrell (June 11, 2004), brother Bobby Dennis.
Survivors include; One daughter and son-in-law, Sherry and Glen Guffey of Niota; Two sons and daughter-in-law, Kenneth "Butch" and Linda Farrell of Athens and Tracy Allen Farrell of Athens. Four grandchildren, Shawn Thompson, Michael Thompson, Lance Farrell and Tricia Farrell Barry; Five great-grandchildren, Destiny Thompson, Isaiah Thompson, Mark Thompson, Shenoa Thompson and Kayla McMinn. Five sister, Vivian Rayburn of Cleveland, Mary Alice Hyde of Athens, Nina Dennis of Decatur, Mildred Clifton of Knoxville. Alma Fay Hicks of Decatur. Several nieces and nephews.
Funeral service will be Thursday, August 29, 2019 in the chapel of Laycock-Hobbs Funeral Home with the Rev. Martin Boling and Rev. Greg Hutsell officiating. The graveside will be 11:00 AM Friday, August  30, 2019 at Clearwater Cemetery. The family will receive friends from 5-7pm Thursday, August 29, 2019 before the service at the funeral home. Those unable to attend may send condolences to www.laycockhobbs.com/notices/Daphne-Farrell. Laycock-Hobbs Funeral Home will be in charge of the arrangements.

To order memorial trees or send flowers to the family in memory of Daphne Farrell, please visit our flower store.